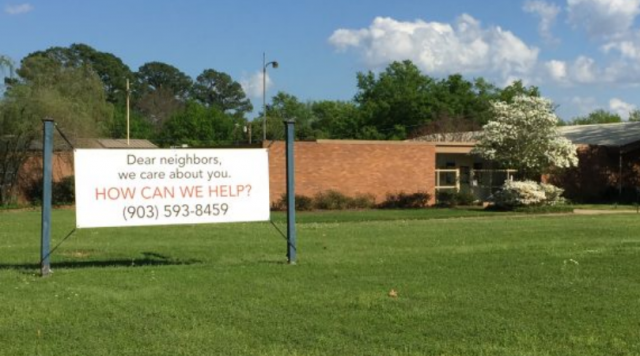 I have owned and ridden a bike in Tyler since my arrival in 2008. But the past three weeks, these rides have become a lifeline. A moment out of the house with a good music playlist and nods of solidarity with fellow riders and walkers have been good medicine, indeed. Last week, as I was riding home, I noticed a new sign at St. Francis Episcopal Church. I wondered what kind of help they are offering and what kinds of responses they have received. I left a message at the number and, several days later, had an interview with the Rev. Mitchell Tollett. Here is his story in his own words, edited for clarity and length.

“I have been in Tyler since January 2014, over six years now. I’ve been the rector of Saint Francis during that time. That’s why I came to Tyler. I’m originally from Houston.

Some call me Father Mitch, Mitch, Reverend, Mister. I’m not very picky. We have so many backgrounds of people that have joined the Episcopal Church. Whatever background they come from and are comfortable using for their religious leadership is fine with me.

St. Francis used to be called St. Andrew’s. It was founded as St. Andrew’s as a church plant of Christ Church downtown. It was all a field then, back in 1958. The whole block, in fact, used to belong to the church. That was sold in St. Andrew’s history because they were going through hard times and had to have some funds. The diocese, which is our larger governing body in Texas, ended up buying the property back and giving us some of the money from it, so they could once again afford a priest. That’s when I came in.

The congregation, we have anywhere from 95 to 105 on a Sunday. It’s mostly an older demographic, but we have some younger people moving in, which is interesting and welcome. It’s heartening to see people curious and interested in the church. The older folks here are also excited by that. I’d probably say as much as 60% or 70% of the congregation [is 60 and above].

Most of the congregation is not from the neighborhood directly connected to St. Francis. We have a few members that are, but most everybody else is between five and 10 miles away. People drive in to go to church here. When I first got here, [we had] started all sorts of initiatives, but we weren’t concentrating on our local neighborhood very much. A couple of years ago, we said, ‘Okay, let’s start inviting our neighbors over.’

Our history was to have Easter egg hunts on Sundays. We had about five kids and about 1,000 Easter eggs. It was just crazy. We decided to change it to Saturday and then invite the neighborhood. We had like 78 people from the neighborhood come. People weren’t afraid to come, which was really reassuring. Our biggest goal was to communicate, ‘We are not asking you to become members of our church. We want to know our community so you can tell us yourself how we can help you.’ So, that was the idea, to gather at least once a quarter.

We’ve had an ice cream social, a burger cookout, we’ve done caroling around Christmastime, and we’ve had neighbors over for pancakes the Tuesday before Ash Wednesday, Shrove Tuesday. That’s been well-received. It seems like that’s what the neighborhood wanted more than anything, was the chance to get to know each other. People don’t do that anymore so much. They don’t even know who their next-door neighbors are. So, it’s kind of a way to meet people in your area within walking distance.

The hamburger cookouts attract a lot of people. Those seem to me the most welcome because it’s a meal, and it’s not inside. It’s more neutral territory. The pancake supper, that’s inside the church, so you actually have to walk in the building, which is probably way more stressful than just walking to the parking lot and eating a hamburger.

I’m always taken back by people that aren’t even Episcopalian that can walk through our doors on a Sunday and want to worship with us. I can’t imagine how brave you have to be to walk into a religious community of strangers, not knowing how they worship. To walk into a space that is alien to you takes a certain amount of bravery, whether or not you’re coming to worship or to eat pancakes. You might not even know anybody in there. To me, that’s brave.

Some people from the neighborhood — who are not members and haven’t become members — have actually given money to the church to keep those programs going. They like the idea of bringing the neighborhood together. The whole purpose of the church was to be a neighborhood church, not necessarily a church with members from all over the city. So, I kind of wanted to get that idea back, that churches are for the neighborhood. And not just the buildings. The people of this church, we congregate here, we should be able to support the local neighbors in some way.

When COVID-19 happened, we took our signs down saying when our service times were. I thought, ‘We told our neighbors we would be there for them, so let’s be there for them, however we can be.’ So, we bought the sign that is out there now. It reads, ‘Dear neighbors, we care about you. How can we help?’ and our phone number. As of this interview, I’ve gotten two phone calls, one being police officers making sure we weren’t meeting more than 10 people. The other was from you, saying you noticed our sign.

I imagine if this lasts longer, and people might be needing more help, that we might get some more calls. But it may be just reassuring to the neighbors that we’re here for them if they need us, if we can help. That’s my hope, that people feel like they’re loved by their local church.

I imagine at first [requests in response to our sign might be], ‘Do y’all have any extra rolls of TP?’ or ‘I can’t get out of my house’ or ‘I’m afraid to get out of my house. Do you have somebody who can go grocery shopping for me?’ or ‘I’m a single mom, and I don’t have work. Can you help me monetarily?’ or ‘I can’t afford diapers right now, can y’all help me with that?’ Whatever would come up. And we’d help as much as we could. I can help as much as I can until the money runs out. After that, I’m probably down to the prayers. ‘I can pray for you about that’ or ‘You can talk to me about it.’ Sometimes, talking helps. It doesn’t solve the problem, but it kind of helps you make it until the next day, at least. Sometimes, that’s all we can do.

This is what we’re called to do. Love God, and love your neighbor, right? We were helping all these people outside the world. We were providing services for ourselves, but we didn’t have anything for our local neighbors. When I drive through the neighborhood, I saw children running around, I’d see all sorts of people that I don’t recognize in the parish. I’m just trying to be faithful and hope God leads me in the right direction. It’s kind of risky to open it up and say, ‘Hey, here’s our number.’ I feel in a lot of ways we’ve opened ourselves to requests we cannot fulfill.

I’m not trying to be a doomer and gloomer. But your governmental system that’s usually not a doom-and-gloom system says there will be at least 100,000 people dying, and that’s if we do everything right. That concerns me a little bit. I think there’s gonna be a lot of suffering from that prediction. There may be lots of pastoral needs. I wouldn’t be surprised if people want us to help them with funeral arrangements or help them to navigate living without somebody.

At St. Francis, we have people from various backgrounds, very conservative and very liberal. But they still come to the church together, and they kneel side by side and receive the sacrament together, even though we have differences. If we could move forward as a community where we can work side by side, despite our differences, the world would be in a much better place.

I would love to see people do that in a Christian way, but that’s where I’m from. People can still do that and not be Christian. We don’t have to believe the same things to get along and love one another. It’s when we start forming our tribes that we start problems. I like the idea of St. Francis’ reaching out to catch on just as viral as COVID-19. If only, right? If only we could pass on things that are positive.

At the end of the day, I’m not a priest, I’m just a believer in God. My hope is that we can become a community. Nothing equalizes people like death. When we bury someone or have a memorial service, and the casket is here, we put a sheet over it so that everybody is the same, whether you’re in a pine box or a gold box. In the face of death, can we finally come to realize that we’re all the same? That’s my hope. Why not?

Someone’s gonna need your help, and you might not make it the first time. You’ll be asked again, and you might not even make it that time. If you get asked a third time, try to be brave enough to step into the arena and help them, as best you can, because that’s how we’re going to make it to the other side together.

It’s hard. It’s tiring. You read things online that say as a leader you should be doing this, that and the other. I see a lot of my fellow priests doing different things than I am. You want to do all those things, you want to be all those things, but you can’t. You can only be who you are. I think God’s called me to do this work, and I’m sufficient. What I have to offer is sufficient. I didn’t say perfect, it’s just enough. And I have to believe that.”