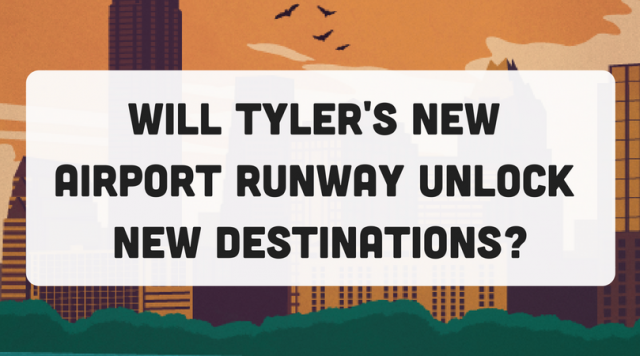 In June, Davis Dickson, the tall, genial airport manager at Tyler Pounds Regional Airport, traveled to Cleveland for an aviation conference called JumpStart. Industry insiders describe what happens there as “speed dating.” Airport managers like Dickson, about 200 of them, stand around in a huge room clutching promotional materials and rehearsing their best lines. Representatives from dozens of airlines sit around tables, waiting to be wooed. A signal is sounded, and the managers rush to their appointed table with just 20 minutes to talk up their cities and airports, hoping to convince the airline to fly there. “A lot of people seem to think airports get to pick and choose which carriers they do business with,” says Dickson. “Really, airlines are really the ones who decide, and there are certain things they look for.”

With the renovation of Tyler Pounds’s longest runway nearing completion—it should be ready this winter—Tylerites are wondering what’s next for our scrappy regional airport. Will a new airline come to Tyler? Will we land bigger planes? More flights per day? New places to fly—or a return to places Tyler Pounds flew to in the past?

While Tyler Pounds has never offered a dazzling array of destinations, we did have more options in the past. In the 1960s Trans-Texas Airways flew direct from Tyler to Longview and Shreveport. Metroflight Airlines used to offer direct service to Nacogdoches. And in the 1990s, Conquest Airlines flew nonstop from our airport to Austin and San Antonio. More recently, United Airlines flew from Tyler to Houston. Not only do those routes no longer fly from Tyler, most of those airlines are gone, too.

The airline industry has gone through waves of consolidation in the past forty years, and independent regional airlines have been squeezed almost to extinction. In their place we now have the “hub and spoke” model, in which a shrinking number of major airlines operate behemoth hubs in cities like Atlanta, Dallas, and Chicago. As a result, it has became vanishingly rare for a city the size of Tyler to fly nonstop to a city the size of Nacogdoches, or even a large non-hub city like Austin. Instead, they’ve all became “spokes” of a wheel that have to connect through a city like Dallas or Houston to get to each other.

Tyler has been relatively lucky. While we have fewer options than before, other small cities across the U.S. have lost all of their air service, bearing incalculable hits to their economies as businesses left town. That hasn’t happened here. Though we lost United Airlines in 2016 due to a slumping energy sector, we’ve held on to American Airlines. And as Tyler grows in population, our airport is poised to grow with it, thanks in large part to federal funding. Over the past few years, the Federal Aviation Administration has awarded Tyler Pounds nearly $50 million for the renovation of its longest runway, almost the entire cost of the project.

Tyler Area Chamber of Commerce president Tom Mullins says he hears interest in Austin and Houston from a lot of Tyler residents and businesses, along with more flights per day to Dallas. A 2017 airport survey also showed high rates of travel from Tyler to Denver and Orlando. So what would it take to convince United to come back, get American Airlines to fly more planes out of Tyler, or entice some new airline to do business at Pounds?

Airlines look at a whole slew of metrics to determine where to add routes and destinations. They study Department of Transportation data on how many people historically flew from one city to another, note the distance to the nearest competitor airports, and review surveys about local demand.

ViaAir, a privately owned regional airline based in Florida, was one of the airlines Tyler Pounds manager Davis Dickson pitched Tyler to last month, along with Texas Sky, Southern Airways Express, and others. This year, ViaAir launched nonstop service from Austin to Tulsa, Oklahoma City, Little Rock, and Baton Rouge, and offers eight nonstop routes from Austin in total. In the past few years, Austin’s surging population growth and booming economy have inspired musings about whether JetBlue, Virgin America, or even Southwest might establish a hub there. While that hasn’t happened so far, the far smaller ViaAir has been quietly forming a Texas hub of its own at Austin Bergstrom International Airport.

Donald Bowman, director of planning and business development at ViaAir, told me his airline hasn’t taken a close look at Tyler yet, but he’d want to see data from independent consultants on how many people currently travel between Tyler and places like Austin, New Orleans, and Houston. He’s also interested in knowing how many people currently opt to drive to Dallas and park their cars there to catch a flight, instead of taking off from Tyler and catching a connection in Dallas. “The biggest competitor that Tyler Pounds has is I-20,” says Chamber president Mullins, citing past studies that show many Tyler flyers fear delayed or canceled flights out of Tyler Pounds.

A Tyler Loop analysis of Bureau of Transportation statistics shows that while Tyler Pounds does have a significantly higher rate of canceled outbound flights compared to Dallas airports, it actually has a lower rate of outbound delays:

Pounds airport manager Davis Dickson says he’s gathering local data to share with ViaAir and other airports he spoke with in Cleveland last month. He’s open to offering incentives to potential airlines, such as waiving landing fees and discounting airport office space. He and Tyler’s Chamber of Commerce have also been asking employers in Tyler and surrounding counties to send in letters describing their air travel needs, to share with the airlines.

Those letters can be critical. ViaAir’s Bowman says his company had been considering a route from Austin to Baton Rouge for many months, but couldn’t decide whether to move ahead. Then the head of a large corporation in Baton Rouge sent ViaAir’s chairman a letter describing his company’s air travel needs. “That single letter swayed our ‘on the fence’ decision to a definite ‘yes,'” says Bowman. A recent request for letters in a Tyler Chamber of Commerce newsletter netted about 70 responses, including some from Anderson and Upshur Counties. “We’re getting a good response, but I can use as many letters as anybody would like to send,” says Dickson.

ViaAir’s Bowman says letters from Tyler could help catch his company’s attention, but that his initial impression of the Tyler market is that it’s simply too small. Still, he’s open to continuing the conversation.

Chamber president Mullins says he’s often asked why Tyler doesn’t try to attract Southwest Airlines, one of the world’s largest carriers, which is headquartered in Dallas. In fact, the city has approached Southwest several times in the past, and “the answer is always the same,” says Mullins. “They say to call back when we have one million more people.” He says it’s important to understand that Southwest’s business model is built on flying lots of planes every day from each destination it serves. “Even if you got everybody within fifty miles to start flying from Tyler Pounds, there’s no way Southwest would fill ten planes a day,” says Mullins. “That’s not on the table in the foreseeable future.”

While Tyler’s population is unlikely to attract another major passenger airline anytime soon, the airport’s expanded runway can support heavier loads, which means we might be able to attract new cargo operations. Mullins says that in the past few years, a major national technology company, one that does a lot of business delivering parts by air, visited Tyler because it was looking to expand in an area with a strong regional airport. “They liked Tyler, but they said we just didn’t have the capabilities,” says Mullins. Now that the new runway is nearly ready, he hopes to invite the company back for a second look. “We need to go out and let industries know that we’ve upgraded our infrastructure,” he says.

In the meantime, there are a few things Tyler residents and business owners can do if they want to have a voice in Tyler’s future flight patterns. The experts I talked to for this story agree that that sending letters or emails to the Chamber of Commerce and the airport can make a difference. And Chamber president Mullins says everyday Tylerites who want their airport to grow can help by “getting off I-20 and using Tyler Pounds Field.”