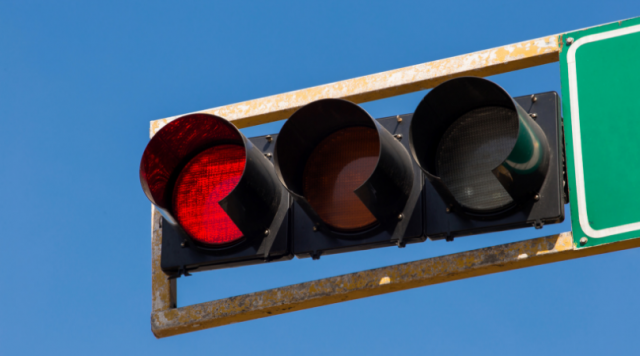 I recently invited Loop readers to share their thoughts on traffic, a perennial local pain point. A whole lot of you pinned the city’s traffic woes on a very specific culprit: the timing and logic of Tyler’s traffic signals. “You stop at every red light,” wrote one frustrated reader. “There is no ‘flow.'” A former hospital worker recalled getting off work as late as four a.m., “the only car on the road,” and gazing out over empty intersections at red lights. Others wondered why left-turn green arrows don’t last longer at rush hour.

It’s not just in our collective car-bound heads. According to one traffic services supervisor I spoke with, drivers on one stretch of South Broadway traveled at an average speed of just 28 miles per hour during Black Friday of last year, according to anonymized cellphone data. The speed limit was 45. You can’t blame all of that slowdown on signal timing, but it’s part of the problem. In December, a city survey revealed that just one in five Tyler residents is satisfied with “effectiveness of traffic and congestion management.”

Here’s the good news: the city is well aware that there’s a major problem, and is working toward a citywide update to our traffic control system. The bad news: it could be a decade before the entire system is overhauled, though you’re likely to see some improvements much sooner.

Here’s how traffic signals currently work in Tyler. There are 147 controller boxes at intersections around town. You’ll recognize them as rectangular green or silver boxes, many of which have been covered with artistic wrappers over the last couple years through the city’s Beauty and the Box program. These boxes “talk” to cameras mounted alongside the actual traffic lights, watching cars from above. Those cameras aren’t there to record license plates or catch speeders. They sense how many cars are stacked up in front of the light, and when the line gets long enough, the camera tells the controller box to flip the color of the traffic signal.

Much of this equipment was installed decades ago—some has been there since the 1960s. “Those are not the latest and greatest controllers to use,” says Scott Taylor, managing director of public works and utilities for the city of Tyler. Most of the equipment is totally pre-programmed; it can’t notice shifts in traffic and update its behavior accordingly. “We can say that between three p.m. and eight p.m., the signal needs to be a minute and a half, but that’s about it,” says Taylor. “It’s a set time, and it’s set by hand.”

To change the signal pattern at a given intersection, Taylor’s department has to send a technician out to that location to reprogram the box in person. While that’s happening, traffic gets directed by a police officer or a temporary stop sign. It’s a significant hassle. Plus, the city is busy simply maintaining the electrical components of the current system, replacing bulbs and fixing out-of-sync signals. There’s little to no time left over for reprogramming.

What’s more, most of the current signals can’t talk to their neighbors. Nearly every intersection is its own island, blind to the rest. So if there’s backup at, say, Fifth and Baxter due to an event at Tyler Junior College, the traffic light at Fifth and Beckham won’t know anything about it, and can’t change its patterns to help ease the congestion.

Last summer, after Mayor Martin Heines promised improvements as part of his State of the City address, the city began the process of figuring out how to update this system. City planners will work with an engineering consultant to pick and choose from the latest and greatest in municipal traffic signal technology. Some improvements are a no-brainer, says Taylor. For one thing, all of the city’s signaled intersections ought to be able to talk to each other, and they should all be controlled from a central command center. No more sending technicians out to painstakingly fiddle with one box at a time.

Ditching the cameras could help, too. On sunny days, east-west facing cameras can get blinded by glare, failing to activate a turn signal or time a red light correctly because they can’t see how many cars are on the road. Different technology, like radar, can avoid that problem.

If a big event is coming up, like graduation at U.T. Tyler, or Rose Festival activities, the city needs to be able to plan ahead and reprogram traffic signals from central command, in anticipation of short bursts of heavy traffic. Taylor is also eager for the city to adopt an “adaptive” traffic management system, where signals “learn” about Tyler’s traffic flows and patterns over time, and begin to adjust themselves.

Taylor also hopes the city will adopt a system that’s flexible enough to work with technology that’s not widely available yet, but is surely coming down the road. For instance, some car manufacturers are experimenting with sensors that let cars and traffic signals talk to each other, telling the driver how fast she would need to drive to hit the next green light (without going over the speed limit). Audi has already rolled out this capability on some models in half a dozen U.S. cities, including Dallas and Houston. You can explore other intriguing concepts for future traffic control technology here, such as lights that turn off your car engine while you’re stopped, to reduce carbon emissions, and signals that are controlled by the flow of pedestrians walking over underground smart grids. Of course, if self-driving cars are truly destined to take over our roadways, the whole concept of traffic lights could go the way of the horse and buggy.

Back in the here and now, the city of Tyler hopes to at least introduce its traffic control system to the 21st century. Taylor says the city has been working with engineering and design consulting firm Kimley-Horn on a study proposal, and hopes a contract will be awarded at a City Council meeting later this month. Funding for this study will come from the city’s half-cent sales tax proceeds, which fund some infrastructure projects.

So how long before you’re sailing from Rose Rudman Park to Cumberland Village, nothing but green lights at your back? The initial study is likely to take six months to a year to complete, and complete, citywide implementation of the study’s recommendations could take ten years, says Taylor. There isn’t even a price tag yet for either the study or the actual changes. With 147 signals to update, “even if a contractor brought in multiple crews, it would still take multiple years,” he says. Fifteen replaced boxes per year is a more realistic pace of change, says Taylor, though it’s too soon to say for sure. “We’re talking about putting in a whole new communication system, whether it’s fiber, cable, radio, or whatever we use. You have to keep traffic moving while you replace the old systems. It’s not just swapping out one box for another.”

And it’s not just the controller boxes that need updating. Old poles need to go, and the city wants to replace lightbulbs with more-efficient LEDs, to cut down on electricity costs. “We’re going to look at where we spend the money first to get the most benefit out of making changes,” says Taylor.

In the meantime, every Loop reader seems to have their own personal dead zone, the dreaded intersection where they invariably can’t catch a glowing green break. Taylor is no exception. “My least favorite intersection right now is Fourth and Donnybrook,” he says. “You got all the traffic coming down Fifth that’s trying to go one direction. And what happens is, the light at Broadway stacks them up. So now you’ve got people blocking the intersection. The light goes green, but nobody can go. Even thought state law says you’re not supposed to block the intersection, it happens.”

Should Tyler have gotten around to reprogramming that intersection by now? Possibly, says Taylor. But he says it’s good thing that, “instead of haphazardly trying to fix one thing at a time,” the city is taking on a systemwide upgrade of all its traffic control technology. “We won’t have a solution overnight, but this way, we build something that can carry us into the future.”