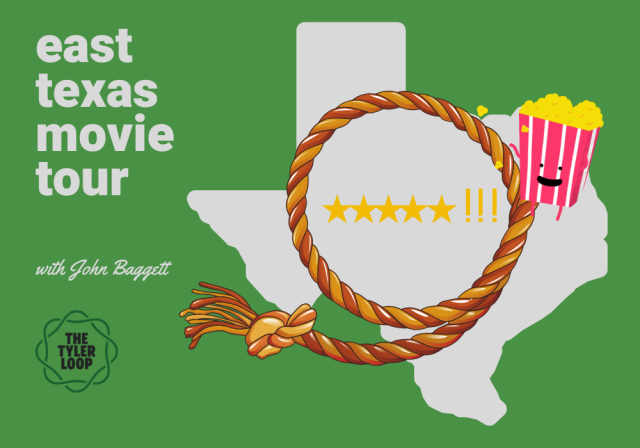 While COVID-19 does its damage, it also creates favorable conditions to stay in and watch movies. Last week, John Baggett took us on a ride through Hollywood’s version of our Piney Woods, viewed from the couch. Buckle up for one last spin, as Baggett explores themes of arson, racism, drug agents and coming of age in East Texas films.

HANDS ON A HARDBODY ⭐️⭐️⭐️⭐️

Since we are under partial lockdown, we managed to make Tiger King, a documentary series on Netflix (like that needed to be explained) into one of the most watched shows in the world. I argue that Hands on a Hard Body is an excellent contender for your attention. The film is, to quote, “a human drama type thing,” documenting the 1995 Hands on a Hard Body contest in Longview. The contest is simple. Randomly selected individuals show up at a local dealership and place their hands on a brand new truck, won by the last person standing.

Hands on a Hard Body sides with no one but shows the contest for what it is – an endurance competition born out of desperation. This film has a bizarrely funny flare similar to Tiger King, but you can’t help but feel bad for some of the contestants who feel like winning this truck is their ticket to a better life. The film was a critical favorite and was even turned into a Broadway musical. Surprisingly, it is really hard to find. Physical copies sell online starting at a minimum of $49.99, but the entire thing is streaming on YouTube and absolutely worth checking out.

There’s a subgenre of horror that is done to death: found footage horror. Once a unique concept to help lend a degree of realism for low budget fare such as The Blair Witch Project or Cannibal Holocaust, found footage became the staple of every up-and-coming filmmaker with no money and a half-baked concept. That being said, when the concept works, it really works. This is the case for the 2014 movie The Houses October Built. The film follows five friends whose journey starts in Tyler and takes them on an epic search for the most extreme haunted houses leading up to Halloween night. They hear rumors of a truly terrifying experience called Blue Skeleton, but with no concrete information, it becomes a myth. Along the way, their search for Blue Skeleton and their attitudes make them targets from people that occupy various haunts, and the line between fun and horror begins to blur.

The Houses October Built, co-written and directed by Bobby Roe, is a surprisingly fun movie that manages to take conventional tropes and still make them creepy. It manages to create tension along the way, building to a shocking and bleak climax. There is also a dumpster fire of a sequel that should be avoided at all costs. The sequel not only manages to be bad on its own, but it pulls off the rare feat of retroactively ruining its predecessor. However, if you just stick to the first movie, you’ll have a spooky good time.

It’s Azalea Ball time in Azalea Springs (which is not at all Tyler), and the town is abuzz. They’re also up in arms. It wasn’t enough they opened up  Hope House, a hospice for patients dying of AIDS. Now, one of those pesky homosexuals — referred to as that way — has let out the town’s dirty secret: what made them that way is literally in the water. While the good citizens of Azalea Springs (which is not, I repeat, not at all Tyler) are in a panic, Alex (Keri Jo Chapman) is trapped in an unfulfilling marriage, constantly criticized by her mother and volunteering at Hope House. There, she reconnects with her old friend, Grace (Teresa Garrett), who has left her abusive husband. Meanwhile, Mark (Derrick Sanders), the son of the local newspaper publisher, is trying to fight his father running sensationalized stories about the town’s water. Spencer (John Hallum), the one who started claims about Azalea Springs’ special water, is holding it together while his partner is nearing the end of his life.

It’s in the Water, which crams all of this plot into one film, is the 1996 cinematic debut, and to date the only film, of writer/director Kelli Herd. The movie is surprisingly charming, heartwarming and painfully ridiculous at times, a trapping of many low-budget 90s films. The story about the water is bonkers to me. People in small town America are smart enough to not see it for more than the joke it is — a snapshot of gay life in a small town. Characters have to fight the hypocrisy of being called “hellbound” by folks who have enough skeletons in their closets to open a Spirit Halloween store. What works best are the love stories and the more serious aspects of the film. The humor in the film bounces back and forth between clever and silly. Overall, this is a charming little movie that hits several nails on several heads.

So, in case your day was a bit too much on the happy side, let’s ruin it with a pair of East Texas documentaries that are uncomfortable, unflinching and primers for some heavy, yet important conversations.

The first, Little Hope Was Arson, directed by Theo Love, is the story of nine East Texas churches that were burned by arsonists. This is not an easy film to watch, and once you have, you never have to see it again because it will never leave you. The doc feels fairly even-handed, but it does raise the question of whether or not the punishment was too severe. It’s a story of tragedy and lost young men, as well as a good argument for forgiveness and grace.

Rating: 4 out of 5 stars. Available on Prime.

The second of these documentaries is Man On Fire, directed by Joel Fendelman. Equally compelling and horrifying, it tells the story of Charles Moore, a pastor committed to social justice and appalled by the racism he saw in the town of Grand Saline. To protest, he sets himself on fire. Man On Fire is hard to watch, unsettling in its lack of bias. The film is a challenging, unflinching look at a man who was willing to die for his message. It just remains to be seen if that message worked the way he intended.

Rating: 4 stars out of 5. Available to stream on Docurama.

PLACES IN THE HEART ⭐️⭐️⭐️⭐️

It’s unfortunate that subjects of racism and segregation are fodder for so many stories. Since it is, the least one can do is make compelling, uplifting drama out of it. Places in the Heart does just that. Set in 1930s Waxahachie, it tells the story of Edna (Sally Field), the widow of the town sheriff. Her husband is accidentally shot and killed by a black teenager, who is later lynched by the town. Desperate to save her farm and keep her family together, she takes in two boarders. There’s Moze (Danny Glover), a black man who offers himself as a handyman, and Mr. Will (John Malkovich), the blind brother of a bank manager who doesn’t want to be there at first but later becomes part of the family.

Places is written and directed by Robert Benton, best known for Kramer vs. Kramer. It also features Lindsay Crouch and Ed Harris as Edna’s sister and brother-in-law. This movie is a powerhouse of acting, writing and direction. It’s compelling and frequently difficult, as well as uplifting. I’m not sure how well the film is known by younger audiences, but it’s one worth discovering. I liked it. I really, really liked it. (Yes, this is the film that spawned Field’s frequently mocked awards speech.)

Rating: 4 stars out of 5. Available on Crackle and PlutoTV.

Of all the films I watched on this journey, this one stood out in its intensity and realism. This was the only film where friends of my friends were actually there when the historic events went down. Rush is the story of two undercover cops (Jason Patric and Jennifer Jason Leigh) in the fictional East Texas town of Katterly working to take down local drug dealers, only to fall into the traps of addiction and corruption themselves. The film was inspired by the autobiographical novel of narcotics agent Kim Wozencraft. (For the true account, you can also check out the infamous non-fiction book Smith County Justice.)

Directed by Lili Fini Zanuck, Rush is one of the discoveries that I kicked myself for not having seen before. It may have been made in the 90s, but it has the raw grit of 1970s films prior to the Star Wars blockbuster era. It’s a tragic, tense movie filled with some career best acting from Patric and amazing performances from Jennifer Jason Leigh and Sam Elliott (and his mustache). This is a film in danger of being forgotten by a younger generation. Not only are the events true, but it’s a fantastic movie that demands to be seen.

Rating: 5 out of 5 stars. Available on Vudu and Prime.

Speaking of gems set in East Texas that I should have seen multiple times already, there’s Skateland. This is a charming coming-of-age drama filmed in Marshall and Shreveport, LA and inspired by Longview. It follows 19-year-old Richie (Shiloh Fernandez), a brilliant aspiring writer who spends his days and nights working at the local skate rink and hanging out with his friends, including Kenny (Taylor Handley) and his sister Michelle (Ashley Greene). When Richie’s parents split up, it propels him towards something he wasn’t ready to deal with: growing up.

The film is a true gem, written and directed by Anthony Burns, who also made the 2015 dark comedy Home Sweet Hell. Filled with great dialogue and a killer soundtrack, it was barely finished before I was messaging friends that they had to see it. This film is 10 years old and like Rush, I should have had every frame memorized long ago. Now I can make up for lost time. If you love coming-of-age movies, love stories, indie comedies and great soundtracks, I highly recommend this one.

It’s been a long, fun journey going through all of these movies. While we continue socially distancing, I hope something sparks your interest and you check these out.

John Baggett is an East Texas native, raised in Chandler before moving to Tyler. He is a member of the advertising sales team for the Tyler Morning Telegraph. He has written movie and theatre reviews for the Tyler Morning Telegraph, EGuide Magazine, and the Athens Daily Review. He is also a board member at Tyler Civic Theatre where he made his acting debut in the play The Disappearance of Maud Crawford. He recently produced Dream Girls and Mamma Mia and will be one of the producers of West Side Story and Breakfast at Tiffany’s for the upcoming season, COVID permitting.

Local churches give vaccines a shot

Art up close: How Gary Roberts’ “better than a photo” drawing rewound the tape for David Stein