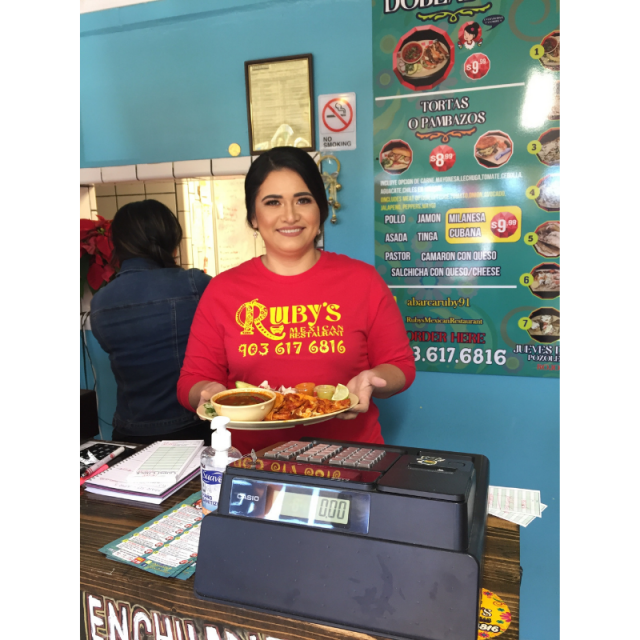 To read this story in Spanish, go here.

On a Monday morning in late November, the parking lot at Ruby’s Mexican Restaurant on Gentry Pkwy. was already filled. Inside, Ruby laid a feast before us: enchiladas, posole and her best-seller, doblados. Then, she laid out the events of her life that took a surprise turn during Texas’ Stay-at-Home order last spring.

That’s when a combination of events — a lost job, a community with free time and fewer restaurant options, viral social media posts and radio endorsements — gave Ruby an opportunity. She seized that opportunity and has never looked back. Here is her story in her own words, edited for length and clarity.

“My name is Ruby Abarca.

I came to Tyler about six years ago from Santana, California, near Anaheim and Newport Beach. Life there was more expensive and difficult. An uncle of mine lived here and invited my family and me to come.

The first restaurant I worked at was Chico’s Restaurant, now where Torchy’s Tacos is located. I cleaned tables and washed dishes.

When they closed their doors, I worked at Chuy’s, again cleaning tables. I had the opportunity to join the kitchen as a cook. I loved it. I stayed there for three years and managed the tortilleria space.

Of course, I had been cooking since I was six years old and already knew how to prepare good food. I love, love, love cooking. People have said to me, “You would pay to cook for others!” I don’t, but if I had to, I would. It’s a pleasure for me.

After Chuy’s was the HIlton Hotel, where they allowed me to use the kitchen. A father of one of the managers once ordered hundreds of dozens of tamales.

I began preparing food for more people. My brother has a lawn care company. He said, “Why don’t you sell to the landscape guys?”

Afterward, I began working at Daniel Boone’s. I worked at the salad bar and continued working at the Hilton breakfast bar and at events. I was making $600 a week  — a lot of money for me. I would always ask for Fridays off, when I would sell tacos de canasta, which I sold for $1 each.

Everything was perfect at that time.

Then COVID started in March. Those of us at Daniel Boone’s with no salary were let go, about 20 of us, including an employee of 15 years. I couldn’t stay there, because I had expenses.

I switched to providing meals at $10 a plate for workers who worked with my brothers in Gilmer. I began making more than before.

I bought a slow cooker and some ribs. I thought, “I want to try something different. I want to try to make barbacoa.” It turned out to be not what I was expecting, but I tried it for some tacos and it worked out. It was an accident that turned out well! I took a picture of it and it got some attention. I call these tacos doblados de barbacoa. They were the boom at many parties.

Some radio DJs from La Invasora 96.7 and Mega 99.3 as well as other social media influencers tried my dishes and helped spread the word. I was selling my food from home, and I was sold out within 30 minutes. After that, I prepared double.

I opened at noon, but starting at 8 a.m., I had people lining up, backed up. I sold out again after the first hour. This was in April, during the Stay at Home order. The police came and said, “We love your food.” They gave me a warning. A neighbor complained about the traffic.

My clientele changed from mostly Latinos to 99% African Americans. This was because of the word getting out on the radio stations and social media, including a man named Cedric.

Probably COVID actually helped me because lots of places were shut down or had restrictions. With me, it was something brand new, cheap and everyone wanted to try it. I began selling my doblados for $2.50 each.

This price enabled me to buy a little more and to raise the quality of beef and cheese. The avocado and au jus for dipping are included — that’s what makes the boom.

I couldn’t keep selling food from my house. I saw an available space place and thought, “Maybe that’s too big.” It turns out that now, it’s actually too small. People said, “This place is salty.” We say in Spanish salty, meaning that even though people try to start a business there, it won’t succeed. I said, “Give me some time.” I opened my restaurant on Aug. 14, three months ago.

Everybody was super excited, very happy. Since the place was kind of salty, people said, “It won’t even work for one month.” But we have been here for three months. The Tyler Paper came by the first week. We had 150 every 30 minutes.

The restaurant customers have been new, as well as those who knew me from before. By 11:30 a.m., the to-go orders are full. From that time, the restaurant traffic is heavy. I’m still filling as many orders as we did the first week. Business is busiest at 3 p.m., when the little ones are getting picked up.

About 20% of our clientele are Latino. I’m noticing more Anglos than before, sometimes from Mother Frances and Stanley’s Barbecue. There are many Anglos who buy food for their workers.

I’m beginning to think about a second location. I was thinking about a food truck. I would like to build something from scratch. Property is expensive. I have my eye on a place, and it’s beautiful. My lender, however, is not very excited about this location, maybe because it’s not in South Tyler. I think I’ll wait a little while longer.

Running a restaurant, every single day I’m learning something new. It has been hard because I employ people and want to be fair. I have 22 workers now.

I went to the wife of the owner of Chema’s for help with understanding regulations and bookkeeping. I have a book with all of the restaurant’s information. It is now Ruby’s, LLC. I pay thousands of dollars in taxes each month, because sales are high.

I use 40, five-pound bags of queso per day! Doblados and enchiladas are the best sellers.

My dream is to have a seafood place, very Mexican with clay plates like they serve in the Guerrero region. I would like to find a place to open in Flint, where I have many customers. I want to own restaurants all over Tyler, but with each one having its specialty.

Last year, I was without money, working all the time and getting the minimum. But now, things are changing. Part of that is thanks to COVID, and it’s also thanks to my parents, kids and brothers. This couldn’t be a reality without them.”