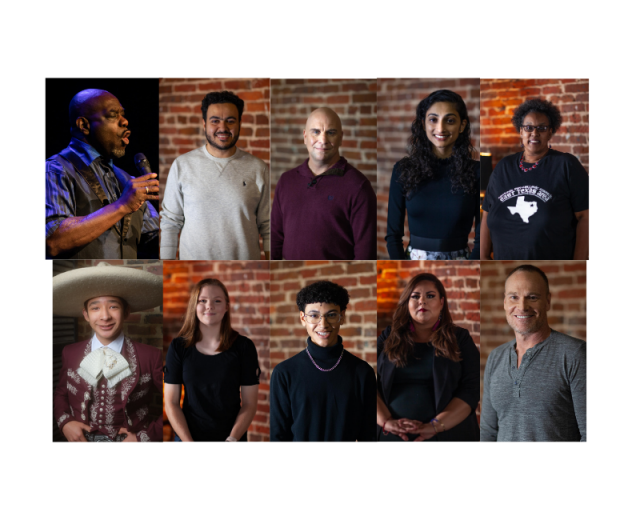 Take four! It’s our fourth batch of surprising, inspiring, eye-opening stories about life in Tyler and East Texas. Six storytellers along with a vocalist, cellist and an encore performance by a mariachi virtuoso take the (virtual) stage at Callynth Photography. The show premiers on Nov. 7 at The Foundry Coffeehouse at 7 p.m., free of charge as a thank you to all Loop members. Not a member yet? Info and 30-second signup here.

Here, you can read more about the latest Out of the Loop storytellers and musicians, along with the talented professionals who make this show happen behind the scenes. Missed the last one? You can view Out of Loop Season 3 in its entirety for free, here.

Want to help us put on another show like this? Become a monthly member of The Tyler Loop. Just $15 a month, the cost of a nice lunch, brings inclusive, in-depth journalism and storytelling to Tyler and beyond.

Damon Carney was born and raised in Tyler with all 10 of his siblings by John and Barbara Carney, who owned and operated East Texas Chemical company and Janitor Service for over 50 years.  A proud graduate of T.K. Gorman High school and Tyler Junior College, Damon has enjoyed his journey from the stages of TJC to the screen in movies such as Logan and television shows including Fear of the Walking Dead.

Sandhya Devaraj, 30, moved to Tyler almost two years ago to start her family medicine residency with her husband, Parashar Trivedi. They both spent over five years in Chicago, the city that helped Sandhya discover her passion for medicine and public service. She is very enthusiastic about preventative medicine and loves exploring vegan foods and trends. While she misses the bustle of her home in the Washington DC suburbs, she loves traveling and living around the country as she learns more about her fellow Americans.

Khaled Elsayed is a Muslim Egyptian who moved to East Texas nearly seven years ago. He received his Masters of Engineering from UT Tyler and now works for the City of Tyler as an IT engineer. Khaled loves traveling, reading about cyber security and horseback riding.

Christo Escalanté was born in Dallas and lives in Mount Pleasant. At six years old, he appeared on a Saturday Univision program. Later, he was featured on Telemundo’s La Voz Kids, Season 2. Christo currently takes opera lessons and, before pandemic, sang every month in Fort Worth at La Gran Plaza. He also appears in Out of the Loop Season 3.

Caleb Franks, 23, has lived in Tyler since 2004. He fell in love with filmmaking at the age of eight, when he starred as a ghost in a cousin’s homemade horror movie. Caleb focuses on thought-provoking, compelling stories that span across generations. His personal motto is, “Soli Deo gloria,” to the glory of God alone.

Michael Guinn is a native of Jacksonville. He works as a full-time social worker and part-time as a motivational speaker and poet. He holds a Master’s of Social Work from UT Arlington. Michael volunteers with organizations that provide services for youth living with mental illness, and for women who have experienced human trafficking and domestic violence. He was a storyteller during Out of the Loop, Season 2, appeared in The Tyler Loop’s COVID Stories series and emceed Out of the Loop season 3.

Robby Jerger is a native of Tyler who, when not working as a hairstylist, is pursuing his education to be an openly gay priest in the Episcopal Diocese of Texas. He is passionate about creating safe spaces of equality for the marginalized.

Neal Katz serves as rabbi at Congregation Beth El in Tyler, TX. In 2003, he was ordained at Hebrew Union College-Jewish Institute of Religion in Cincinnati, Ohio. In addition to his pulpit life, Rabbi Katz is also a singer/songwriter and music producer. He has taught courses in Introduction to Judaism and Jewish Philosophy at TJC and UT Tyler. He serves on numerous local non-profit Boards and has won the T.B. Butler Award and The W.C. Windsor Awards from the Tyler Chamber of Commerce for outstanding community service. He is married to Jennifer Katz and together they have three children.

Grayson Lackey is an award winning writer/director/director of photography who has had his work appear in festivals in L.A, Chicago and all over Texas. His lifestyle of rubbing shoulders with both blue-collar workers as well as the artistic community, has developed his empathic, intimate visual style. In addition to directing video for Out of the Loop 3, Grayson produced video for all of The Tyler Loop’s COVID Stories series.

Emily Lininger is a high school senior at Tyler Legacy High School and  has been playing cello going for nearly eight years. She learned violin in elementary school from her mom, an orchestra director at Kilgore ISD. Emily has since added the cello and viola to her musical repertoire, and hopes to continue growing in her skills. For Out of the Loop season 4, Emily performed Cello Suite No. 1 in G Major, Prelude by J.S. Bach.

Amanda Nail is teaches English at Tyler Legacy High School and works as a freelance writer, illustrator and editor on the side. She is currently pursuing her masters in writing at Johns Hopkins University. Amanda loves to spend her time biking through the woods of East Texas or curled up in a swing reading a good book.

Clayton Nail is theatre department head at Tyler Legacy High School. He is pursuing his masters in directing at the University of Idaho. When he isn’t directing and designing productions at Legacy, he can be found contributing his skills and artistry to other local theater and performance events.

Jane Neal is the storytelling director of Out of the Loop and executive director of The Tyler Loop. She also works at the Literacy Council of Tyler and Tyler Public Library and is a certified interfaith spiritual director. She is a member of Leadership Tyler Class 33 and a former French teacher at the newly-named Tyler Legacy High School, where she ran a storytelling program called Senior Stories. Jane and her husband Don have four children.

Paulina Pedroza is a community advocate and teacher. She has taught English to language learners for 12 years, as well as immigrants preparing for their United States citizenship test. She also teaches Spanish to Tyler police officers. Paulina is an active liaison between Tyler and East Texas organizations and city services and local Latino communities. She is a board member of The Tyler Loop.

Dee Pendleton is a native Tylerite and retired business analyst with American Airlines. She currently serves as president of Tyler Alumnae Chapter of Delta Sigma Theta Sorority, Inc., and is an advisory board member for Texas African American Museum and The American Heart Association.

Kenny Rigsby is a filmmaker and humanitarian from East Texas. He’s the founder of For The Silent, a non-profit organization protecting youth from sexual exploitation and trafficking. Kenny makes films so that people might see one another — engaging in the world around them empathetically and recognizing their shared humanity.

Jalen Tinsley is a 17-year-old senior at Tyler Legacy High School, where he is active in the choir and theatre departments. He’s planning on pursuing a degree in musical theatre after graduation. Jalen has been a Tyler resident since he was six months old. He would like to thank his family, friends and others who have supported him in his accomplishments.

Leah Moser Wansley is a business and marketing consultant, Chief Brand Pilot for First iZ, and a board member for The Tyler Loop. She is the former president of the Leadership Tyler and Discovery Science Place boards of directors, a member of the executive committee of Leadership Tyler Catalyst 100, and a member of the Dayspring Live Broadcast team. Leah graduated from Whitehouse High School, Tyler Junior College, and the University of North Texas in Communication Design.