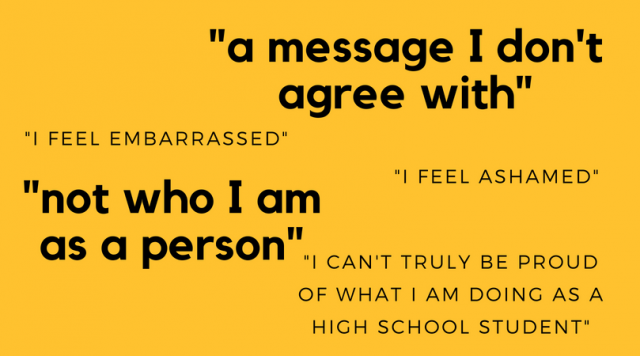 Last night, an unlikely civics lesson took place in a warm, colorful South Tyler home. Twenty Robert E. Lee High School students and recent grads met up over pizza to discuss how to get the adults on the Tyler public school board to change their high school’s name.

Last week, news broke that two Tyler school board members who had previously supported renaming Robert E. Lee High School were now opposed to discussing the matter any further. That prompted Robert E. Lee junior Haftu Knight to post a public Instagram plea: “I thought the school board was going to change it. They aren’t if WE don’t do something. Let’s let them hear from us.”

Knight’s mom Lori volunteered to host a gathering and provide pizza. A white family friend active in local political organizing, Von Criswell, offered to tutor the group on how to deliver public comments at school board meetings. Marie Claire Neal, a white rising sophomore at Rice University and REL Class of 2017—she was last year’s salutatorian—volunteered to talk about the history and symbolism of the school’s name.

Around 7pm, everyone in attendance sprawled out in the living room. A few others came in late, apologizing because they’d been at church. The gathered students were mostly white, with about six black attendees and several who come from mixed families. The Knights are a mixed family; Haftu and some of his siblings are of Ethiopian descent and their adoptive parents are white.

Conversation heated up as several students described how, in their view, racial tensions among the school’s 2,400 students are influenced and even enabled by the school’s name. “It sends a message. We all know what it’s about,” said Matthew Spellman, a white senior headed to Earlham College in Indiana in the fall.

Brandon Collins, a black junior at Lee, recounted a white student hurling “the n-word” at one of his friends after she declined to stand for the pledge of allegiance, following the example of prominent athletes who’ve protested police shootings of unarmed black people in similar ways. Collins said he also recently heard another white student use the slur while describing the movie The Black Panther.

Other students recalled a white cheerleader saying a particular black student could never win a popular vote for prom queen due to her racial identity—a statement that prompted the black student to campaign and win.

“Nobody is up here saying we should forget about the Confederacy,” Spellman said. “We just don’t want to honor it and act like it was the high point in our existence. It’s history. It belongs in a textbook. It belongs in museum or on a historical marker. It does not belong on the name of a public school where the majority of kids are not white.”

Students said they often noticed that their school’s name raised eyebrows when meeting people outside Tyler. “It makes the community look bad,” said Kamal Bains, an Indian-American senior headed to the University of California at Berkeley in the fall.

Jonathan Hawk, a white junior, said that during a trip to Florida last summer, he drew stares while wearing a Robert E. Lee soccer team shirt.  “I was giving a message that I had no intention of giving,” he said. “People who named the school one-hundred-percent intended that message to be conveyed.”

Haftu Knight, a star cross-country runner ranked third in the state, said he felt hurt every time he crossed a finish line and heard announcers describe him over the speakers as “Haftu Knight from Robert E. Lee.”

“It kind of makes me feel like I belong to somebody—like I belong to Robert E. Lee,” said Knight. “It’s very offensive to me, because he supported the people that were trying to keep slavery going.”

Criswell, the local political organizer, urged students who wanted to speak to the board on Monday evening meeting to arrive early and bring short written statements. The group could even designate one person to speak for all of them, she said, and everyone else could be asked to stand and show their support.

Lori Knight, Haftu’s mom, passed around legal pads, and students who weren’t sure they could attend or speak began writing down messages they wanted the board to hear. Later, Knight corralled her son for help in projecting a map of each school board member’s district on a TV screen, so the students could look for their address and figure out who represents them.

Conversation turned to how little students had been taught about Tyler’s decades of struggles over segregation. Several students cited the fact that some school board members have called this issue “divisive” and “distracting” as evidence that a significant portion of Tyler fears change. “They want to live in a rosy bubble,” said senior Rhea Dakal, who is Nepali-American and will attend the University of California at Los Angeles in the fall.

There was conversation about how some opponents of change have gotten personal. Haftu Knight read the group an Instagram message sent by a white student to a friend of Knight’s, objecting to Knight’s idea for a student meeting. Renaming the school would “destroy the school’s history,” that student wrote, adding that Knight was a recent immigrant who should “appreciate the fact that he has food on his table every night” and “shouldn’t complain about anything.”

“This hurts,” Knight told the gathering as his friends gasped and shook their heads. Changing the name might not heal all divides, Knight added, but it would send an important message to anyone still harboring racial prejudice: “They’re not gonna have the same power that they have now.”

Someone pointed out that the school board currently has no plans to vote on the matter. “What kind of society are we living in when it’s too much for you to have a vote?” said Taniyah Jones, a black Lee junior, her voice breaking. “A vote.”

Jones added that some school board members have said “that the kids don’t care.” She said it was important to show up to Monday night’s meeting “to let them know that we’re here. Let them hear our voices.” She hopes more student visibility and participation will urge school board members to put the item back on the agenda for further discussion.

Students talked about the importance of being respectful to the board. “We shouldn’t put them in the place where they have to defend themselves,” said Neal, the current Rice freshman. Rather, the students’ message should emphasize to the board that “we are the people you work for.”

Matthew Hawk, a white 2017 Lee graduate now attending the University of Texas at Austin, asked the group whether renaming the school “Tyler Lee” would be enough. Someone pointed out that might be a winning argument to people who worried about costs, because fewer letters might cost less to install on the front of the building.

In the next room, stacks of pepperoni and cheese pizzas were getting cold, and mounds of chocolate chip cookies were going uneaten. It was nearly 9pm. The kids kept talking until one of the adults finally called out, “Pizza break?” Neal nodded and told her friends they’d reassemble after eating. “We can come back, and y’all can write letters.”

“To Santa Claus?” someone asked, laughing.

“To your board members,” said Neal.