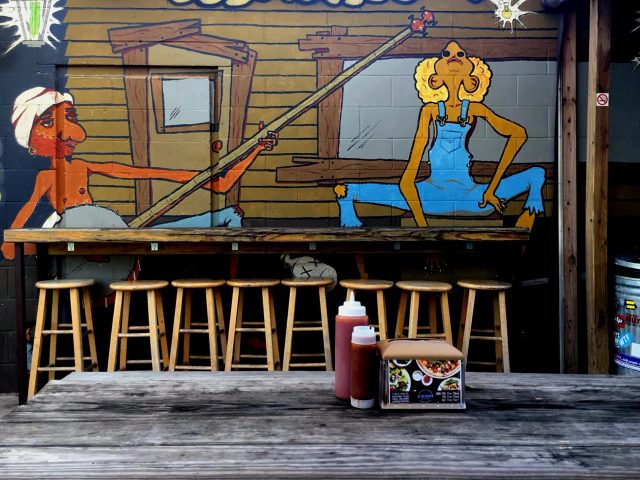 Even on a damp, chilly evening, I prefer the back patio at Stanley’s — and not just because it’s closer to the bar. I like my beer and brisket with a view of the big mural painted on the back wall. I fell in love with the painting on my first visit out to Tyler several years ago; it’s goofy and cheery and makes you feel like you’re eating in good company even when you’re tucking into a Mother Clucker all by your lonesome.

I’ve always wondered about the story behind that mural, and a few weeks ago I finally met the man responsible. Joshua David Keenan is a Longview-based plumber by day, artist the rest of the time. He’s lived in East Texas on and off his whole life, and spent countless nights over the years at Stanley’s, for the food and drinks, of course, but especially for the eclectic mix of live music.

“I’ve seen everything there from old black blues guys to, one time, a Middle Eastern banjo player,” Keenan says. “You never know what it’s going to be, but it’ll probably be interesting.”

One night about ten years ago, Keenan was hanging out back at Stanley’s with some buddies, including Stanley’s co-owner Nick Pencis. This was well before the back patio was renovated into the homey rustic space it is today.

“I went up to Nick and I said, what do you think about putting a big mural up there?” Keenan recalls. “We’d both had a few in us, and he said, sure, why not? I asked what he wanted, and he just said, something that represents Stanley’s. To me, that’s a place where unique music is played and different kinds of people can come together. So, that’s what I started sketching.” 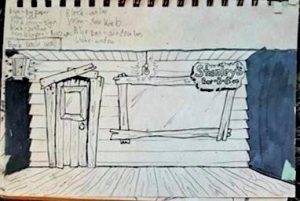 Keenan decided to portray a diverse groups of musicians playing an eclectic mix of instruments. “I purposely chose a mixed-race group of people because I’d always seen that at Stanley’s, people of different races hanging out, just enjoying good music and good barbecue together. Especially in East Texas, I felt like that was important to show.”

Keenan also wanted to reflect the fact that musical genres popular at Stanley’s, from blues to rock to bluegrass, were originally fueled by people living in poverty. His musicians lean on a rickety shack, dressed in loose rags and plucking what look like handmade instruments.

He worked by himself on the mural for about a month, on nights and weekends. Pencis paid him in food and beer along the way, and a few hundred dollars when the painting was done. The worm-like yellow outline around Keenan’s musical motif was added later, by local artist Nora Schreiber, while Keenan was off living in Denver for a few years. (He used his mural earnings to fund the move).

“I don’t mind it,” says Keenan. “I’m all about art evolving into something else.” He likes Schreiber’s work; she once painted a mural outside a local tattoo shop he used to own. Since then, he’s also painted a number of smaller signs around the restaurant.

This summer, he’ll be be painting a mural in the cafeteria of a Longview middle school where his wife Kate, an educational diagnostician, works. “The school is underfunded, and the kids need something motivating,” he says. He’s planning to depict kids dressed in the uniforms of all sorts of professions they might be interested in, both “far-reaching and practical,” from astronaut to plumber. He’s also done murals for a few marijuana dispensaries in Denver, and a poster for Cedar Creek Brewing Company in Seven Points, Texas.

The Cedar Creek poster was another case where Keenan approached the owner of the business, unsolicited, and offered his artistic services. “As far as a side business goes,” he says, “it’s a pretty good way to create art for a place you want to support.”