When describing Tyler to friends who’ve never visited, I often call it “a small city with big city traffic.” Picking my son up from school each day is a gasoline-and-stereo-fueled test of endurance. By the end of the school year, I think I’ll have memorized the bumper stickers of all the honor roll parents.

There’s some solace in knowing I’m not the only one. In a 2015 city survey, 58 percent of Tylerites included traffic in their four most important local issues — up from 39 percent in 2012. Traffic was an important issue to more people than crime, jobs, or taxes were.

Of course, griping about traffic is a national pastime, no matter where you live. Fortunately (or unfortunately?) for Tylerites, we’ve got numbers to back up our road rage. The U.S. Census Bureau collects information on how long Americans spend commuting each day. I looked at data from the three Texas counties that are most similar to Smith County in both population and land area. They all have shorter commute times than we do. Smith County residents drive about 20 percent more than those in McLennan County (which includes Waco) or Jefferson County (Beaumont), and nearly 40 percent more than folks living in Lubbock County.

This trend is only getting worse. The same census data shows that commute times in Smith County increased by about 17 percent between 2010 and 2015.

These numbers are countywide averages; your commute could be longer or shorter depending on where in Tyler you live. When you drill down into different parts of the city, it appears one area in particular may be responsible for our growing automative logjam: South Tyler. Traffic has especially soared around the Village at Cumberland Park, which opened in late 2014 and houses Studio Movie Grill, World Market, and dozens of other new businesses. 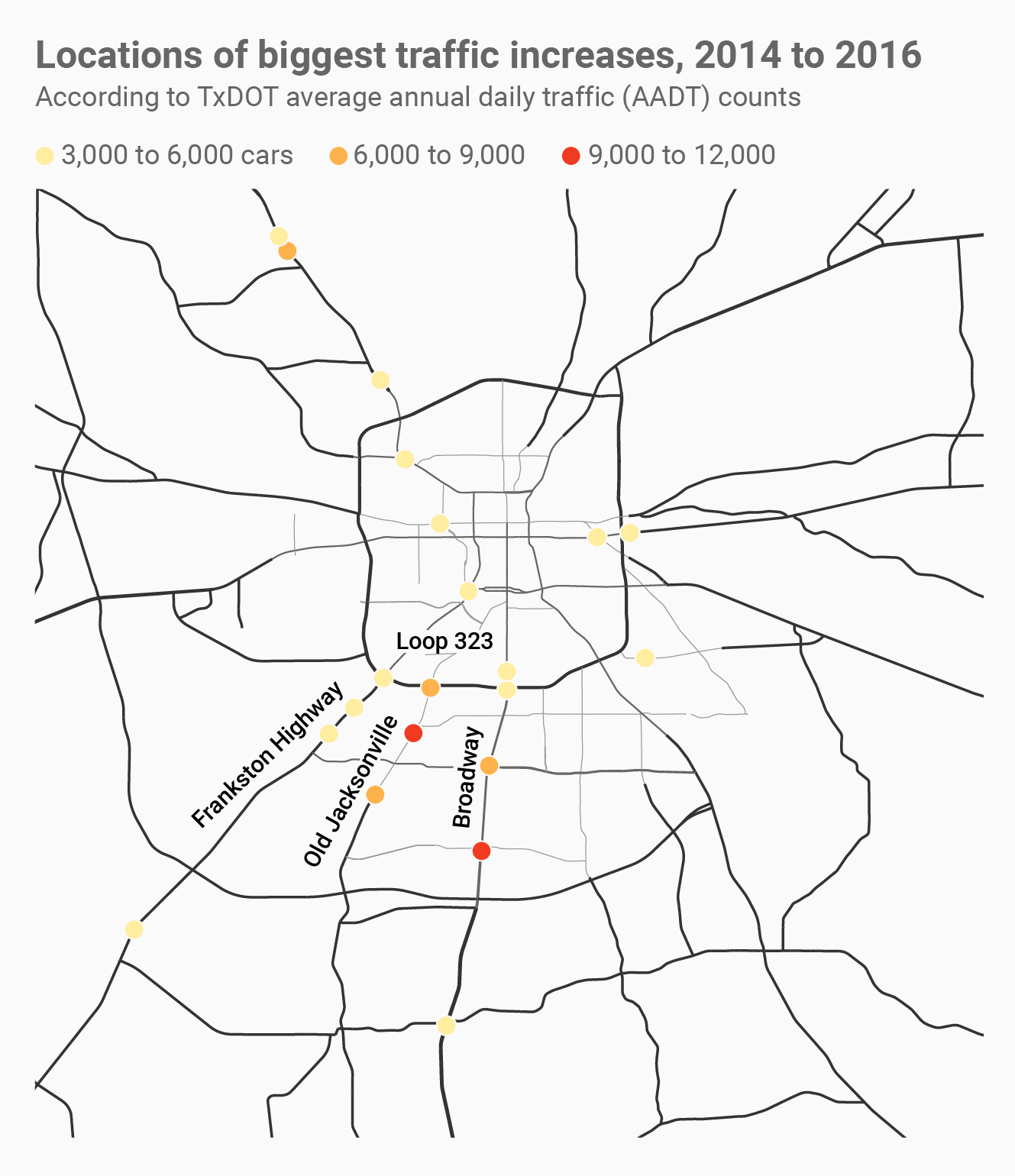 The Texas Department of Transportation tracks traffic counting stations across the city. Between 2013 and 2016, the average number of cars that crossed Cumberland Road on Broadway increased 53 percent, from 21,000 to 32,000. South Tyler also includes the other two roads with big traffic increases: Old Jacksonville between the Loop and Cumberland Road, and Frankston Highway between the Loop and Grande Boulevard.

There are a bunch of obvious reasons for Tyler’s bad traffic: a history of car-oriented development, infrequent bus service, a lack of functional sidewalks, demand for low-density housing, and the clustering of new businesses in far South Tyler — away from where people live. (In-N-Out, H&M, and a bowling alley are on the way.)

That’s a long way of saying, this is a really hard problem to solve. But hey, at least Tyler’s terrible traffic isn’t just in your head, right?

Have a horror story about Tyler traffic? Ideas for how to fix it? We’re listening: [email protected].