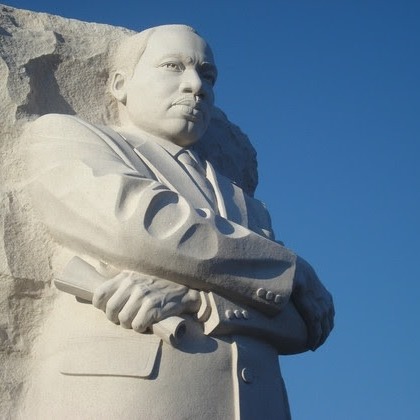 This year, Tyler pivoted from its usual Martin Luther King Jr Day. festivities at the city square, followed by a procession to Immaculate Conception Catholic Cathedral. Instead, a celebration focused on the upcoming relocation of the Texas African American Museum.

Gloria Washington, the museum’s executive director, opened the event reminiscing about an MLK Day observation 25 years ago in Jasper, Texas, after an ice storm. “So we may be outdoors, socially distant during this coronavirus pandemic, but it was rougher to hold a big event back then,” said Washington, to chuckles from the audience.

Pastor Nicholas McGrew also spoke. “We stand in the shadow of the Emancipation Proclamation, but 100 years later, we still stand in an island of poverty in an ocean of the rich. To be satisfied, we need to have mobility, vote and have justice. We still have the dream despite frustrations. ‘Let us be judged by the content of our character.’ That’s one of Martin Luther King’s most famous sayings. Let freedom ring! We need to have integration of races and creeds. Then we’ll be free at last.”

Verlinda Stanton sang ”Lift Every Voice and Sing,” informally known as the Black national anthem. Stanton has worked with celebrities including George Clinton and James Earl Jones and has sung at an event for President Barack Obama.

Stanley Cofer, president of the Empowerment Community Development Corporation, which oversees the museum, introduced the keynote speaker, Dr. Orenthia Mason. He noted the integrated crowd gathered was a dream of Martin Luther King. “Esteem others higher than yourself,” he said, “It’s like giving flowers to those who are still alive. All men are created equal.”

The Rev. Mason, a retired teacher of 27 years with Tyler ISD and retired minister of St. James Christian Methodist Episcopal Church, congratulated the museum and city. She asked, “What condition is our condition since MLK’s ‘I Have a Dream’ speech? We live through a recurring cycle of racism, extremists and hatred.”

She continued, “What condition is our condition in? When minorities vote more than average, it’s labeled as fraud. We are in perilous times.”

The Rev. Mason recalled walking to school in groups with other Black children in the 1960s, because they could get attacked, sometimes with baseball bats.

While the Rev. Mason expressed appreciation for participating in the city’s integrated organizations, including Leadership Tyler, she said she felt more respected during segregation.

Reflecting on the present, the Rev. Mason said, “Artifacts of the past include menacing white drivers varooming their cars behind me on South Broadway. Many Tylerites don’t even know where Texas College is located.”

After a song by Demetrick Tezino, Clarence Shackelford revealed a  replica of Washington DC’s Martin Luther King Jr. statue, donated to the museum by Leroy Francis and placed on its front lawn.

In concluding remarks, the financial needs and future plans of the museum were revealed. The museum hopes to raise $300,000 for renovations and outdoor construction, including a play area and outdoor dining area, with food trucks arriving for special events.

J.D. Meyer is a graduate of A&M and The University of North Texas. He taught at Texas College and Mountain View Community College in Oak Cliff, Dallas, and was substitute teacher for Dallas, Garland, Tyler and Winona school districts. Meyer has volunteered with East TX Human Needs Network’s transportation committee and the Northeast Texas Community Health Workers’ Coalition.