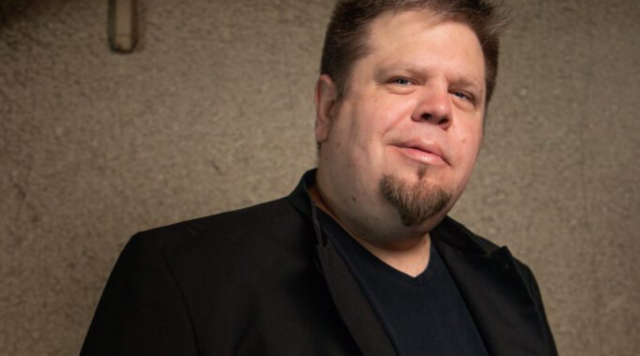 All photos courtesy of John Bucher.

thetylerloop · Out of the Loop Season 2: John Bucher

Tyler became my home in the fourth grade. I lived here throughout my formative years, graduated from John Tyler high school and left after a year at TJC. In Tyler, there once existed a portal for time travelers, for adventures, and for those seeking forces greater than themselves. It was called Movies and Sounds Video Store. They rented laser disks, Betamax, VHS cassettes, both new releases and old classics of every known genre.

It was said that once, Movies and Sounds sold cassette tapes and record albums, but whatever had become of the “sounds” had been lost to the ages. By the time I got there, movies and microwave popcorn were really all that was left. Movies and Sounds had a very special relationship with our family because they had an economic system that was a deal we couldn’t pass up. See, Movies and Sounds had new releases for sure, but their older films were only 99 cents, and they had a deal where if you rented nine movies, you got the 10th for free. So for $10, our family of five could rent 10 movies.

Now, when my father got home from work every Friday, we would pack into the car and head down to the video store to seek our collective and individual fortunes, inside of Movies and Sounds. And because we had 10 movies, that meant every person got to select two films. My mom often would forego her two films. I think she just liked to see her kids have every option she could give them, or maybe she just didn’t care. But regardless, this left two wildcard options that my father divvied up in various ways throughout the years. Now, the selections that we made, they said something about our perceived role in the family. My father, he often rented “The Godfather.” My youngest brother, “PeeWee’s Big Adventure”, my middle brother, “Ghostbusters.” And I usually rented “Raiders of the Lost Ark” or “Star Wars.” But after much debate and duress, we finally would return home with our selections and spend the next 48 hours watching as many of those films as we could, as if it were our job.

By the time Monday morning rolled around, we sometimes had one or two films left, but most times we had finished all 10. We took them back to Movies and Sounds and counted down the hours for Friday to come, so we could repeat the process all over again. And this went on for weeks, for months and eventually for years.

The first time an adult that wasn’t legally obligated to do so made me feel special was in Movies and Sounds. Ms. James, my fourth grade teacher at Dixie Elementary, she saw me browsing in the action/adventure section and she walked over and she said hello. I proudly introduced my family to Ms. James, standing in awe of the fact that teachers existed outside the classroom.

See, Ms. James had changed my life a few weeks earlier. When I had moved to Tyler from Denison, Texas, I was known for exactly three things at my former school. One, I had perfectly traced a picture of Babe Ruth. Two, I was a bit of a kickball athlete. And three, I was the school’s leading culinary critic of glue and paste. I preferred Elmers, which had just a minty taste with just a hint of cheese.

I had learned my times tables before I came to Dixie Elementary, which proved very significant on the first day of classes that I had with Ms. James, because she had just taught that morning — students there — how to do multiplication. And she passed out a quiz. Having already known how to do multiplication, despite my paste-eating ways, I was able to quickly finish the quiz, and I walked up and I placed it on Ms. James’ desk. I turned around to go back to my seat and everyone in the classroom was staring at me just like you are right now, mouths agape. I started hearing whispers rumble through the class.

“You must be some sort of genius. No one could have finished that quickly.”
From that day forward at Dixie Elementary, I was known as a smart kid and it changed my life forever.

I, from that day forward, began to wonder, if maybe I could become that student that they all thought I was. So I went home and I began to read about Arthurian legends and the Knights of the Round Table. I began to read about heroes that would go off on a quest. I became inspired by Tyler legends, like Sandy Duncan and Earl Campbell, Jerry Mumphrey — people who had spun themselves dizzy on the merry-go-round at Bergfeld Park, just like I had, and went on to accomplish great things. Maybe, just maybe, I could be like them one day.

See, in those days, it didn’t really even occur to me that people actually had to go make those movies that I rented it at Movies and Sounds, and it would be a long time before I considered that that was even possible for someone like me.

These days, I often push back from my desk and I stand in my window in Hollywood, and I overlook the entertainment capital of the world, staring at the Hollywood sign. And I remember where it all began for me in that little building, out on Highway 31 — Movies and Sounds.

I remember one Friday night, my father, he took a bit of a sabbatical on our normal trip to Movies and Sounds. And he took us instead to see a storyteller named Jerry Clower from Mississippi. Jerry Clower packed Rose Stadium with a crowd that outnumbered the JT-Lee game that year. And we sat, and we listened. As he told funny stories, we were spellbound by his every word. I realized he was communicating to us in a narrative language that we had been taught since birth. Storytelling was our native tongue.

John Bucher lives in Los Angeles, California, and moved to Tyler in the fourth grade from Denison, Texas, where he was born. He is the author of six books, multiple films, comics, and more. He has worked with HBO, DC Comics, and The History Channel, and teaches at Studio School in Los Angeles and the L.A. Film Center. John has a Ph.D. in Mythology and Depth Psychology. He is the co-host of Skeleton Keys podcast, dedicated to unlocking the mysteries of mythology and history in pop culture. He is returning to Tyler for the first time in nearly 20 years to share his story about growing up in our region.

Feather by Feather: A Vision of Wings

Meet the storytellers, musicians and organizers of Out of the Loop 8: True stories from Tyler and East Texas